It’s doesn’t seem like a natural fit at first, but using Minimalism as a Food Blogger can be an effective way of knowing how to use your time with purpose. Masa and Michael Ofei of the site The Minimalist Vegan share their perspectives on using minimalism in blogging, social media, and passion/professional projects. Today’s guests on the Chopped Podcast are Maša and Michael Ofei of the site Minimalist Vegan.

We are talking about their book the Minimalist Vegan (see links below). They have a food blog by the same name, but their book takes on more than just food. It’s about how we can embrace minimillsm as an everyday practice and the implications that are involved.

I realize you might be asking how does minimalism impact food blogging? Michael shares about the importance of knowing your “Big Why” and how that can set you free from all the shoulds.

Having a minimalist approach to your life and blog, can help you move past the shoulds to doing what you feel purposeful about. It’s all about your Big Why.

I have been thinking of the idea of minimalism a lot lately. As food bloggers we have SO much to do in our everyday lives. I wonder if the concepts of minimalism can help make our lives easier. If I have only the clothes that I love, it can be easier to get ready in the morning.  If my desk is clean and tidy, it helps me feel more productive. If I have the tools I love in the kitchen, it makes that process go further.

I think for me, a minimalist approach to food blogging can involve hiring staff to help me with social media. Social media is what I consider to be a zone of competency: I can do it, but others can do it just as well..or even better! I talked about these zones based on the book by Dr. Gay Hendricks in a previous episode (see link below on Mindset).

Maša has a different approach to social media. She prefers maintaining her own voice. It’s another example of how we all do things differently. It’s another reason we shouldn’t be comparing ourselves to others. Listen and observe how others do the work and then find what fits you; what works best for you. Minimalism as a Path to Authenticity

Michael suggests how looking for the beauty in simplicity can be very inspirational.

That really connected with me because I’ve been on this path to understanding authenticity. And minimalism can be a a way of doing that. But first I had to ask a question: Does being a minimalist mean not being ambitious? Said differently…are minimalists boring?

Michael says you can be both a minimalist and ambitious. Of course, the key is to truly understand yourself and what motivates you.

So, the mindset of minimalism, pursuing less, can help you redefine success for yourself as an individual rather than through what others expect of you.

What do I want my life to look like? You have to look internally.

Maša says it trains your brain to say no a little more easily.

We talk about being a people pleaser and learning to be authentic.

Maša talks about that famous quote, you’re most like the average of the five people you spend the most time with.  And the importance of choosing your friends wisely.

Michael explains that when we surround ourselves with so many disparate things we get confused about what we really want to do.

I’m reading the book Presto by Penn Jillette. It’s very good, but I only recommend it if you can handle salty language and topics. I believe he refers to these topics as funky. Anyway, Penn found himself in a very bad health situation and his doctor was suggesting surgery to help him lose weight.

Penn wanted to try something besides surgery. Instead he went another route and changed his diet. And one of the things he discovered after he made dramatic changes to his diet, is that he had been eating too much cake. When he was a kid, he would have birthday cake on his birthday. And he didn’t have cake very much the rest of the year.

However, once he became an adult, and a really successful one at that, he was having cake every day. And it got him to the point where he didn’t even appreciate cake. Now he follows a strict diet and his health improved dramatically as a result. But he allows himself cheat days. On cheat days he eats whatever he wants. As a result, he discovered that having the pleasures on rare and appropriate occasions helps him to know what he wants more on an everyday basis.

He’s more in tune to his real tastes without all the layers of other flavors clouding it out. It makes me think that Maša and Michael are on to something with this minimalism approach for life. Because, reducing the things we have around us can be a way of making the good things really shine through.

Michael said they watched the documentary called Earthlings (see link below) and that’s what inspired their initial interest in minimalism.

Michael says to be really honest about what you want to do and where you can find the time to pursue it.

High performers oftentimes make sacrifices and don’t get to do all the things, like watch a lot of Netflix. And I imagine he’s right. I’m sure Roger Federer is not up-to-date on Breaking Bad, but he’s out putting the work in on the tennis courts. That reaps for him the rewards that he’s most attuned with. Michael said that these high performers make decisions to go all in and it brings them the most satisfaction and it’s how they are best able to serve the world.

Maša says another important step is to stop comparing yourself to others. The important thing is to know and follow your own true north star.

I was very inspired by today’s discussion and I hope you will be too. So, let’s do this. Here’s today’s feature interview with Maša and Michael on using minimalism as a food blogger.

This episode on Using Minimalism as a Food Blogger includes information you’ll want to check out:

Thanks so much for listening to today’s podcast. I hope you found it informative and helpful to the work you do every day. Make sure you don’t miss out on any of the Chopped Podcast episodes by heading on over to iTunes to subscribe to the Chopped Podcast. While you’re there, provide a review and rating is a great way to help other podcast listeners find it too! That’s it for today’s podcast. As always, thanks so much for joining in the discussion! 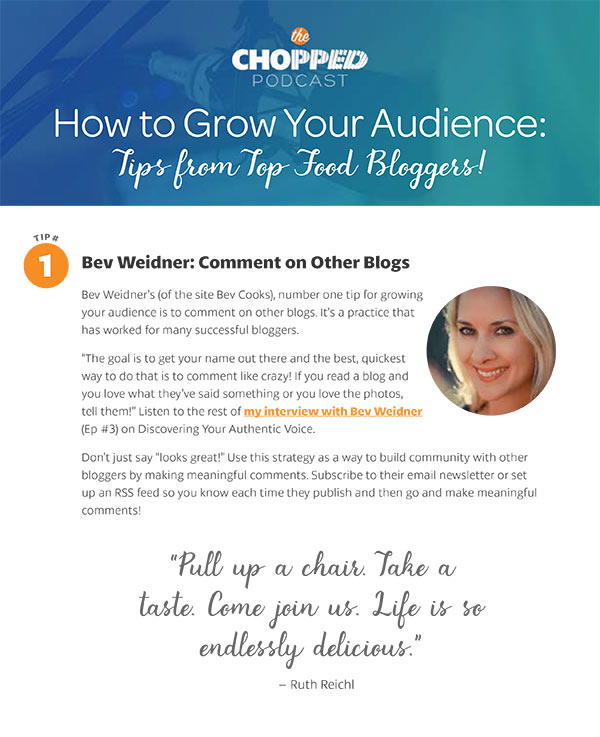